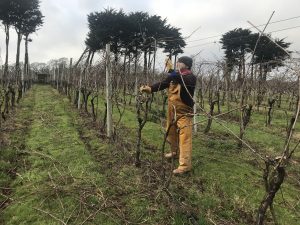 Pruning is one of the biggest jobs of the year at the vineyard.  Here at Polgoon we’ve started pruning as usual in the first weeks of January. We’ll prune, clear and tie down around 14,000 vines in total.  It usually takes us about 3 months to complete. It’s incredibly labour intensive. We do everything by hand using a very sharp set of secateurs that are cleaned and sharpened daily and a pair of loppers for those big, heavy cuts that are too tough for the secateurs to handle.

There’s a real art to pruning. Choosing the right canes is imperative to ensure a good crop for the following year. We try to choose 2 ,3 or 4 canes from each vine, they must be of a good size and without any defects.  The aim is to set up a well-balanced vine for the coming season, one that will not create too much shade from excessive leaf, letting enough light into the fruiting zone. Most importantly we try to pick the canes that have been in the sun all year and not those that have been in the middle of the canopy and in the shade. This means that we’re choosing canes that will be more fruitful, as sunshine helps buds form that will carry more fruit in the coming season.

Once we’ve finished pruning, we then revisit the vines and strip out the skeleton of dead wood that’s been cut free, leaving just the selected canes on the vine – the chosen ones! These stripped clippings are then cleared from the vineyard and burnt on a bonfire ensuring any unwanted fungal disease (mildew or botrytis) is unable to carry over to the vines next year.

Next we wrap the canes around the trellising wires and tie to the wire at the end of the cane. Hopefully, weather permitting, we should be finished by the end of March just in time for the buds to start appearing at the beginning of April. 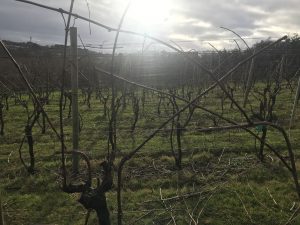 These buds will become the green shoots that carry the fruit during the growing season that ends at harvest time in September/October. These shoots, left untrimmed, could grow 8 or 10 feet each and there’s around 20 to 30 on each vine. We use two sets of wires to hold the shoots in place as they grow, these wires are held taut by wooden posts in the rows and the larger, much stronger end posts bare the weight of the wires. After this, the vines turn from green shoots to wood as they become dormant and all the energy in the vine draws down, back into the root system.

There are many types of training trellising systems for vines and we’ve tried a few of them here at the vineyard.  We’ve found that the system which works best for us here at Polgoon is a simple system called (VSP) Vertical Shoot Positioned.  It’s the system that gives us the best growth control and ultimately, makes the most of our fantastic Cornish sunshine!